What Is A FICO Score? 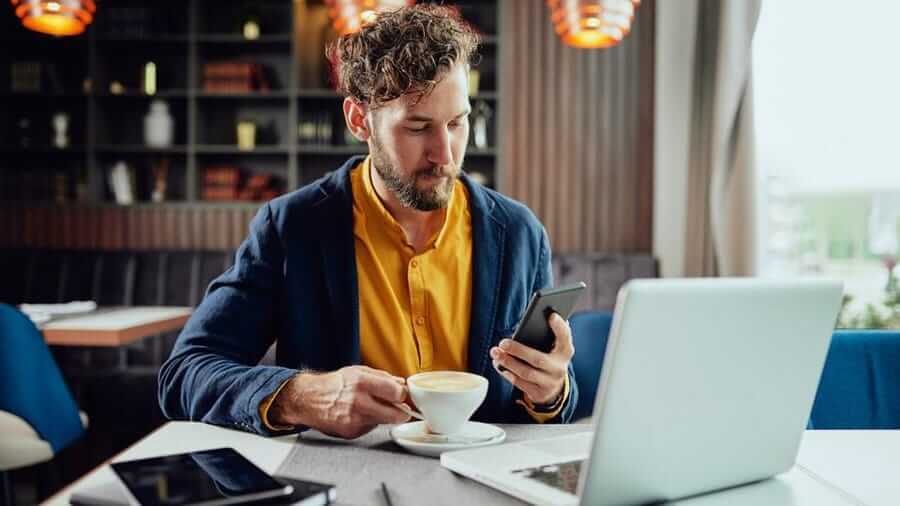 Fair Isaac and Company (FICO) is an analytics software company that was founded in 1956 by an engineer named William R. Fair and a mathematician named Earl Judson Isaac. Their first credit scoring system was released in 1958, and in 1991, they released their FICO scores to the three major credit bureaus and officially renamed their company to FICO in 2009. Although many new versions have been released over the years, their credit score model is the most widely used in the U.S. It’s also used by over half of the top 100 banks in the world.

FICO’s credit score model uses a scale between 300 and 850 that represents the creditworthiness of an individual. A higher number indicates a better credit score, while a lower number suggests the borrower is at a greater risk of paying late or defaulting on the loan.

The FICO score essentially quantifies how likely you are to repay the loan. Lenders use this information to decide whether or not to approve a loan and also to set the terms of the loan – the higher the risk, the less favorable the loan terms.

Why Is It Important To Understand FICO Scores?

It’s not uncommon for Americans to borrow money. Few people are able to afford large investments,, such as a home or a car, without a loan. Since your eligibility to take out a loan at favorable terms depends on your credit score, it helps to understand how it’s calculated.

By understanding more about your FICO score, you can take steps to improve your existing score as well as prevent your score from deteriorating. As a result, you’ll have a better chance at qualifying for a loan.

How Are FICO Scores Calculated?

The Fair Isaac Corporation has never officially released the details of the FICO score formula. However, there is an understanding that the FICO scores are calculated using a mathematical algorithm that considers several key factors to determine an individual’s creditworthiness.

However, the factors are not equally weighted. The following are the primary factors used to determine the FICO score and the influence that they have on your FICO score:

The payment history is your personal record of how you’ve paid your loans and monthly bills. This payment history includes credit cards, insurance premiums, utility bills, mortgage/rent payments, and student loans. If you miss payments, make payments past their deadline, or default on payments completely, it will affect your FICO score.

The biggest concern for lenders is that a borrower won’t make their payments on time or in full. When a borrower defaults on a loan, the lender has to invest resources and time to recoup the loan amount. As such, payment history is heavily weighted in the FICO score calculation and lenders pay close attention to this.

The amounts you owe to your creditors makes up 30% of your FICO score. High debt levels may suggest to lenders that you are at an increased risk of missing payments or defaulting on your loan.

Lenders assess your debt levels to protect themselves. They want to make sure that you are able to repay the loan, plus any interest. If you are already using a high percentage of your income to repay your previous debts, this may indicate you could miss future payments.

The length of time that you’ve been responsible for your current accounts will be considered when calculating your FICO score, alongside how many accounts you have opened over the years.

For example, if your oldest credit accounts are from a decade ago, this is looked on favorably as it means that you have experience managing your credit. If you’ve opened up three new lines of credit in the past month, this may negatively affect your FICO score because it indicates that you could be taking on a significant amount of debt in a short period of time.

Lenders will assess if borrowers can properly manage various types of credit, as this is a good indicator that the borrower can be trusted with more complex financial scenarios in the future.

For example, if you are paying down a personal loan and two credit cards, this indicates that you are managing several types of credit. Conversely, if you’ve only ever had credit card accounts, lenders will be more wary about your ability to manage a loan.

New credit refers to how many new accounts you’ve opened recently. If you’re opening up several credit accounts rapidly, this will negatively affect your score since it may indicate that you are taking on too much. If you have multiple accounts but have had them for a long time, it’s more likely to benefit your score (if you’re keeping your balance low and making payments on time) and not hurt it.

The following is the FICO score scale, ranging from 300 to 850. There are five rating tiers, ranging from poor to excellent, which indicate the risk you present to lenders. 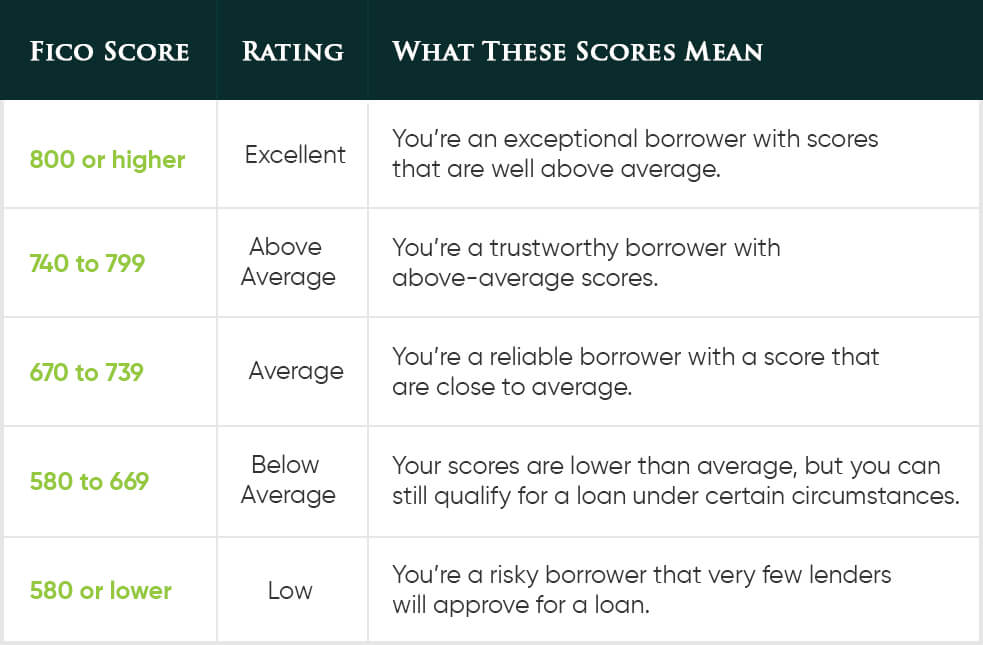 *based on the average FICO score of US consumers

What Is Considered A Good FICO Score?

Even though the difference between each rating tier is relatively small, there is still a considerable gap in terms of how lenders view you as a borrower. If your score is over 620, then it’s likely that you’ll be able to find loan options with either credit unions or smaller banks.

If your FICO score is under 550, you may struggle to get approved for more traditional forms of credit. A low score doesn’t necessarily mean that you won’t be approved, but lenders will either expect to see a significant down payment or will insist on other collateral to lower the risk. In some cases, you may even need a cosigner to secure financing from these institutions.

Remember, your FICO score not only helps determine your eligibility for certain loans, but it also has a significant impact on the loan terms, such as the size of the down payment required or the interest rate you’ll be charged. As such, you should try to aim for a higher score if possible. In general, you should aim to have a credit score of at least 670.

Why Are There Different Versions Of The FICO Score?

FICO created its first FICO score model in 1989, and the model is regularly updated as new technology and datasets become available. This makes the score more predictable and reliable and helps with decision-making for lenders. The ninth version is the most current iteration, however some lenders still use older versions.

There are two categories of the FICO score: the base FICO score and industry-specific FICO scores.

The base FICO score is the most commonly used version.

There are dozens of industry-specific FICO scores tailored to certain types of loans, such as the FICO Bankcard Score and the FICO Auto Score. These scores use slightly different models that take into account the loan type. There are also differences in the scale used. Industry-specific models range from 250 to 900 instead of the 300 to 850 base score.

It also factors in whether you’re making more than the minimum payment or not. These factors carry more weight because they help lenders determine whether you’re financially capable of taking on a car loan.

Additionally, you may find some differences in the use of base FICO scores. Whenever FICO releases an updated version, not every lender makes the change from the version they’re using right away. It may simply take them longer to upgrade – or they may be happy with the version that they are using.

As a result, a lender who is using an older base version may not be factoring in rental history, whereas newer versions do factor in rental payments if they are reported. FICO 10T is the latest version.

The Difference Between FICO Score and Other Credit Scores

FICO is the most widely used credit score. It is estimated that 90% of lenders use the FICO score to assess how creditworthy a borrower is.

However, other scoring models are commonly used in determining a loan, such as VantageScore. VantageScore has grown in popularity over the past few years due to the fact that its model is empirically-derived. It’s also statistically sound and has been adopted by key U.S. financial regulators, including the Consumer Financial Protection Bureau. The factors used to determine credit scores are generally the same, although they may influence the final score differently.

There are many differences between the scoring models. For example, FICO requires that you have a credit account at least six months old, whereas VantageScore will score a consumer as long as they have a minimum of one account on their credit report.

Do You Have A Good FICO Score?

Your FICO score will impact your ability to qualify for loans at favorable terms. Although you should have no trouble qualifying for traditional loan types if you have a “good” or “excellent” score, it all depends on the type of loan you’re trying to secure.

For example, if you’re looking to take out an investment loan, you should aim for a credit score of 740 to 760 to avoid high interest rates or having to make a sizable down payment.

Understand more about credit scores before you borrow or lend!

By Scott Craft
|
Acquired Your First Rental Property. Now What? So you’ve bought your first rental property, or maybe you just moved out of your old primary residence...
General

By Kevin Amolsch
|
Rates Increasing At Record Speed Rates have more than doubled in less than a year. The last time rates have increased this fast was in...
General

By Kevin Amolsch
|
There are lots of ways to invest in real estate, but if you're looking for a long-term investment that can bring in regular income, then...